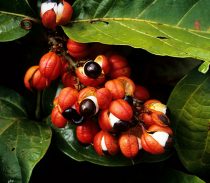 Guarana’s anti-obesity potential was the subject of a study that included researchers from UFRGS,  from the Universidad de la Costa, Colombia, and from the Federal University of Sergipe (UFS). From experiments with rats, scientists have proved that, in addition to preventing weight gain and fat accumulation, the plant can alleviate other conditions associated with obesity, such as insulin resistance. The results were published in the scientific journal Phytotherapy Research.

Rich in caffeine and with known antioxidant and anti-inflammatory properties, the extract from roasted guarana seeds has long been used as stimulant, aphrodisiac, tonic and also for weight loss. However, as the researchers claim that there was a lack of studies proving the supplement efficacy and security. “This extract is used in formulations (along with other compounds) for weight loss, but no one had proved the effect of this extract in its pure form,” says the study co-author Rafael Bortolin, professor at the Universidad de la Costa and collaborator at UFRGS Center for Oxidative Stress Studies.

During 18 weeks, 24 rats were fed with an ordinary western diet – developed by the group to induce obesity in the animals –, while another 24 consumed a low-fat control diet. Also, half of each group received guarana powder supplementation in a quantity that, if transposed to humans, would be equivalent to 300 milligrams per person per day.

According to Bortolin, the manufacturer of the guarana extract used in the research recommends a daily use of 1 to 3 grams, “however, we didn’t find scientific basis for this prescription. Also it is not easy to find out on the label what guarana is indicated for, but people in general use it because of its caffeine to feel alert and avoid sleepiness.” The use of guarana in these high doses, he explains, is to achieve a higher caffeine intake that keeps the user awake, similar to what happens whe we drink coffee. “The difference is that in order to lose weight, the use must be chronic, so it cannot be a high dose. Unlike a day when you have to study for a test and stay up all night, which is a momentary (acute) use when you can use a higher dosage.”

The scientists observed that guarana supplementation decreased weight gain and prevented excessive fat accumulation among animals fed with the Western diet. It also prevented other conditions related to obesity, as insulin resistance and dysregulation of adipokines – substances secreted by the adipose tissue, directly related to body fat distribution, and whose imbalance is associated with obesity and metabolic syndromes among other diseases.

After demonstrating guarana’s efficacy for the prevention and treatment of obesity, researchers began investigating its safety and possible adverse effects. “Many studies evaluating therapeutic potentials forget to evaluate the toxic potential of compounds (or extracts). We evaluated the toxic potential and identified no toxicity of guarana (in the concentration we used) in either the control group or the obese diet group,” explains Bortolin. It is important to emphasize, however, that effects of the excessive use of guarana were not studied. “It is quite possible that at higher doses it might exert some toxicity, because it has caffeine. Just as coffee can be toxic in high doses, so can guarana,” warns the researcher.

Finally, the mechanisms by which the substance acts to prevent weight gain were investigated. After verifying no quantity reduction of food intake, neither significant changes in the gut microbiota of the animals that consumed guarana, scientists analyzed changes in the brown adipose tissue – one of the two types of adipose tissue that we have in our body (the other is white).

“Thermogenesis is characterized by fat burning for heat production, instead of ATP [adenosine triphosphate, the molecule responsible for storing energy for the basic activities of cells]. It occurs because the mitochondria present in the brown adipose tissue have a lot of UCP, which is a protein that breaks down an electron gradient necessary for the production of ATP.  Thus, if we have a larger volume of this tissue, or if we have more mitochondria in this tissue, or if we have more UCPs in these mitochondria we can say that we promote thermogenesis, that is, we ‘activate’ the tissue,” explains Bortolin.

And that is what happened in the experiments. Guarana not only induced the expansion of brown adipose tissue but it also increased the number of mitochondria contained in it and the activation of proteins involved in the thermogenesis process. “It is known that the protein called by the acronym AMPK is related to energy expenditure and could contribute to the activation of brown adipose tissue. So, we investigated this protein and noticed that it was more phosphorylated (active) in the animals that consumed guarana. In addition, we also observed an increase in mitochondria number and UCP content. In summary, we saw that guarana was able to activate brown adipose tissue and we suggest that one of the mechanisms is via AMPK,” complements the researcher. It is worth reiterating, however, that this was an initial step. Tests on obese humans are still needed to confirm the study results. 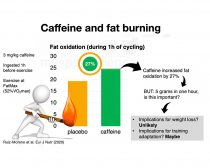 The authors conducted a placebo controlled double blind study. Participants conducted two experimental trials. Before one of these they ingested 3 mg/kg of caffeine and before the other trial they ingested the same amount of a placebo. The capsules were ingested 1 hour before exercise. The participants (12 in total) exercised at fatmax intensity. This means that in an earlier test, the researchers had established the exercise intensity where these participants oxidised most fat. This is highly individual but on average was around 50% VO2max, a low-to-moderate exercise intensity.

During the hour of cycling, the subjects oxygen uptake and carbon dioxide production were measured and fat and carbohydrate oxidation were calculated from this. What the researchers found was an average total fat oxidation of 19.4 grams for the hour with placebo and 24.7 grams with caffeine. That is a whopping 27% more fat oxidation. They also found that there was no difference in energy expenditure and thus the increased fat oxidation meant that carbohydrate use was used (or carbohydrate was spared).

The findings raise two questions. How does this relate to the rest of the literature, because we don’t want to make the mistake of drawing a conclusion on the basis of a single published study. The second question is what are the practical implications, if any?

The finding that caffeine can increase fat oxidation is not new. Several studies have shown this before, but it is important to realise that there are also many studies that did not see any effect of caffeine on fat oxidation. The different findings can at least party be explained by the exercise intensity used in the studies. A previous study by Juan del Coso’s research team (2) showed that effects of caffeine on fat oxidation could be observed at lower intensities but not at higher intensities (>80%VO2max).

There are other factors that could affect the outcomes as well, such as how trained the tested individuals were, the duration of the activity, the control of the diet before the trials and so on. But overall the findings of the study are in line with several previous studies and I would conclude that caffeine CAN in some situations increase fat oxidation. I was maybe a little surprised by the magnitude of change in this study, which seems a little greater than other studies. Of course, the effects may have been exaggerated by the fact that these studies were conducted in the fasted state (no breakfast), when fat oxidation is naturally high. As soon as we ingest a breakfast or eat carbohydrate, fat oxidation may be reduced by 30%. But the study is solid and well done and the authors need to be complimented. The issue is not the study, but may be the interpretation of the results by others.

The million dollar question: does it matter? What are the practical implications of these findings? The authors are very careful not to speculate too much here. They just say that if people use caffeine for weight loss or for reducing body fat, they need to consider the negative effects of caffeine as well. I have seen social media reports who also linked the use of caffeine and the 27% increase in fat oxidation to weight loss. But let’s be clear: Weight loss will only occur when the energy expended exceeds energy intake. Caffeine did not increase energy expenditure, so you would still have to reduce intake to lose weight regardless of whether you burn more fat or not. The second observation is of course that even in this study where the effects on fat oxidation seem to be rather large, we are talking about a difference of only 5 grams of fat per hour of exercise. This means that in order to lose 1kg of body fat, one would have to exercise 200 hours!!

…..we are talking about a difference of only 5 grams of fat per hour of exercise. This means that in order to lose 1kg of body fat, one would have to exercise 200 hours!!

If an 80 kg person would like to lose 2% fat, it would take them a year, IF they exercised for an hour every day! So in terms of weight loss these findings are probably not important. Where the findings may potentially be important is that we stimulate fat oxidation more with caffeine, we therefore stress fat oxidation pathways more and we may adapt more. But how often would we need to do this in order to get significant adaptations that also translate to a performance or health effect? Without longer term studies such questions are difficult to answer.